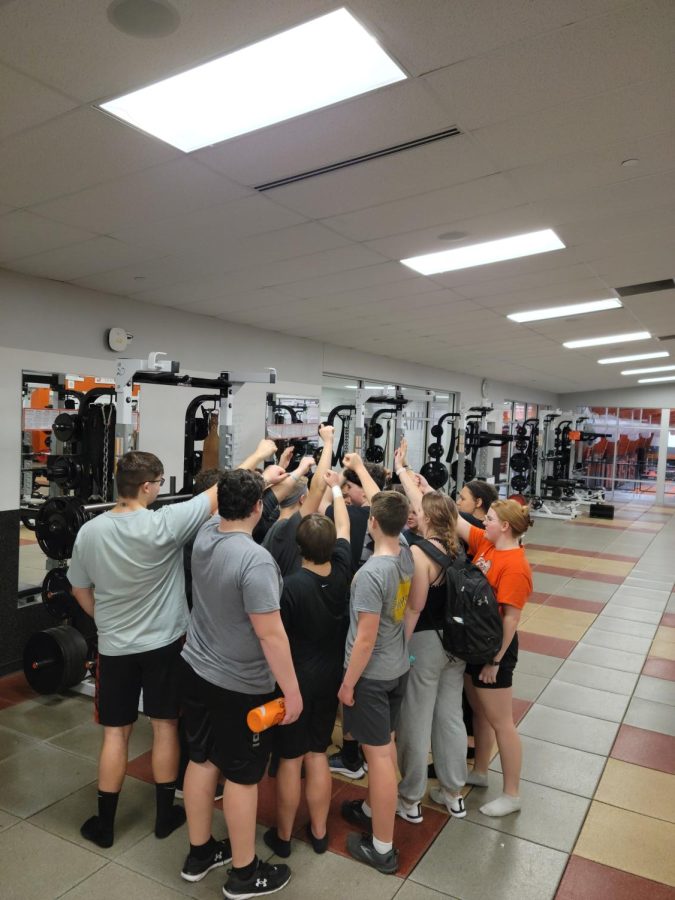 Natrona throwers gather to end practice on a positive note.

Though shotput and other throwing events may not be well known, they are a fascinating component of track and field. Robert Cogdill, who has been coaching shot put and discus for 13 years, stated “The shot put is a unique event in that it is a combination of strength, speed, technique, and athleticism.” Athletes can compete in shot put through high school, college, and Olympic levels all around the world, yet there is still a minimal amount of people that know little to anything about this ancient sport.

With the indoor track and field season starting up some spectators might have questions about this event. Shot put consists of an individual “putting” (pushing rather than throwing) an eight to sixteen pound primarily iron or brass ball as far as possible across a field. “The first competitions resembling the modern shot put were traced in the Middle Ages in which soldiers used cannonballs in the events”(Sportsmatik). This sport has grown since then, being added to the Olympics for men in 1896 and women later in 1948.

Currently, shot put is an event held in almost every high school track and field meet. Teenagers all around the world and at different age groups train to improve their skills. Hudson Santistevan, a student at Natrona County High School, has been competing in shot put for eight years and stated “My goal for the indoor season is to break the school record and do rotational shot put.” Instead of gliding, Santistevan believes he will get more distance out of changing his technique to a rotational throw, where the thrower spins before throwing. Ramsay Myers, a freshman at NC, is starting his first year competing in shot put. “I would like to hit 30 feet and also complete a perfect glide,” explained Myers. Throwing coaches usually expect throwers to grow quickly in their sophomore year, as their brains learn more how to work with their bodies.

When asked how the season is progressing, Coach Cogdill explained that his athletes “continue to work on their throwing technique and improve their PR’s (personal records) as they compete around the state.” You can come watch Natrona County’s shot put team at their next indoor track meet on Saturday, February 12 at Natrona county High School.