Both players are multi-sport athletes who excelled at NCHS athletics. 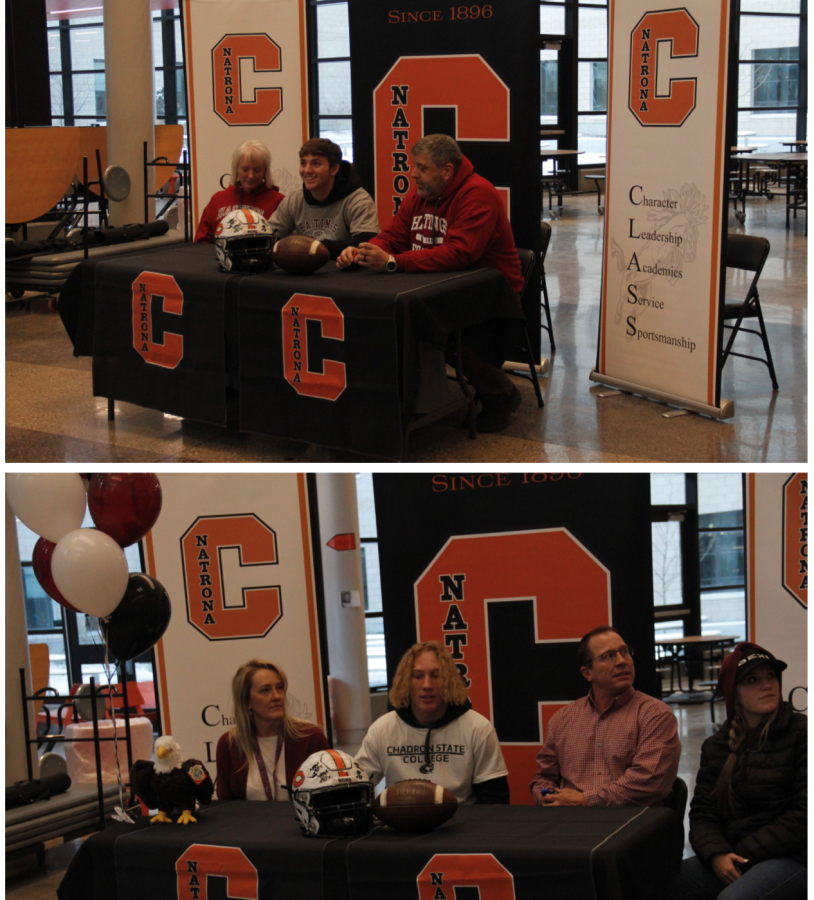 Brendyn Nelson and Kaeden Wilcox sign their letters of intent for college ball.

Nelson explained why he chose Hastings College; “I initially was just looking at colleges, and I was talking to my coach, and they actually referred me to it and said I should look into it, so I kinda looked, and then we reached out, and I got an invitation to go visit. There were a few in Kansas and one in South Dakota, but this one just came on top and was probably the best one I looked into, and it was just really one of them,” he said.

For Nelson, a sense of community helped drive his decision. “Just the community and the campus overall was really amazing, and the coaches were super nice, and then they had some players that I got to meet, and they were all just super welcoming, and it just felt like a super good place that I wanted to be.” Nelson also adds that he thinks the freshman program is “really good actually. They’re rebuilding, so they got a new coach last year, and he’s kinda been rebuilding and making it really like NC in a similar way, so I’m really excited for that.”

Wilcox said that he chose Chadron State, because “I just enjoyed the campus and it was like the school reached out to me instead of me reaching out to them and whatnot, so I like that factor of it and I liked the campus.” For Wilcox, knowing other kids from Casper who have found success at Chadron helped his decision. “Yeah, of course, it’ll be nice going there and knowing kids and being able to play with … other kids that came from NC,” Wilcox says.

Though both Nelson and Wilcox also wrestle, it didn’t factor into their decisions about colleges as much. “It’s just a football deal honestly, I mean I do wrestling because I enjoy it and have fun with it and it helps me with football, but football’s always been the one sport that I really wanted to do,” Nelson says. Wilcox, who also plays baseball, adds “I’m not sure if I want to [wrestle] but I might. I don’t know. I’m not sure, I just see where it takes me.”

Both Nelson and Wilcox mention that it was stressful deciding where to go. Nelson says “it was a little bit stressful, till I made the decision, just [figuring out] what was best for me. It wasn’t too stressful, but I think there were definitely times where it got to be a little bit stressful.” Nelson’s parents also add “That was the biggest thing was making sure he went where he was comfortable, not where he thought we wanted him to go, because it had to be for him. [He] just [had to] make sure that he made the decision that was best for him.”