Is he all that? 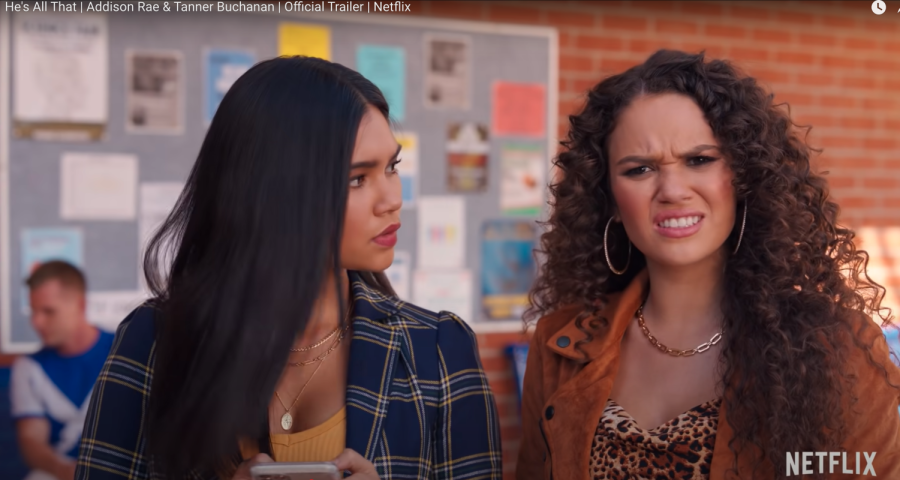 A screenshot from the Netflix trailer for "He's All That."

“The economy stinks, bees are dying, and movies are pretty much all sequels now.”

Modern school systems promote and teach analytical thinking in regards to story-telling, all while most modern media insists on dumbing down the classics and vomiting them out for us to consume. In other words, streaming platforms have developed a penchant for revamping nostalgia-fueled cash cows, adding an approximation to a “young star” and punching its audience in the face with a lukewarm violation of what the audience originally fell in love with.

There are exceptions to this painful reboot process, points in which the hard work of the creative team shines through. For example, Netflix’s Cobra Kai or The Dark Crystal: Age of Resistance. But even these are littered with grabs at childhood heartstrings.

Then there is He’s All That, derived from 1999’s film She’s All That. The 1999 plot features high school star Zach (Freddie Prinze Jr) taking a bet that he could choose any random girl and make her his social equal. Plenty of rom-com tropes ensue as the subject of his impossible bet, Laney (Rachael Leigh Cook) wins his heart and teaches him about being a good person. And Laney learns how to let go and live her life by spending time with him. Aside from drearily outdated tropes like, “pretty girl isn’t pretty until she takes off her glasses and lets her hair down,” the movie is simple fun with a cheesy ending and easy-viewing feel.

2021’s reboot is the story told from a gender-flipped perspective. Addison Rae fills the void that Freddie Prinze Jr. left as Padgett, an influencer on a platform similar to TikTok. She is a highschool student dating another internet celebrity- also a high schooler -who spends his time making music that is a joke among the characters as well as the viewers. The “Ugly Duckling” who Padgett will be transforming is Cameron Kweller, male model disguised under a beanie and the rest of the characters insisting that he’s a total dweeb.

Upon finishing the film three words come to mind: Ads, models, and why.

The film, much like its predecessor, was easy fun, if one looks through the absurd amount of product placement in the film, the end credits thanking forty-three separate companies for contributions. But what it lacked was originality, a decent sense of humor, and attainability. Not every teenager is blowing up on TikTok, not every fallout has to result in national humiliation, and really, not every kid is this mean. The insistence upon social divide and portraying every “popular kid” (a trope that should be abolished in media) as a bully is outdated and outright harmful. Continuously marketing to children the severe, or extremely stressful woes of high school is not going to prepare them for life or teach them the altruistic message of the film: to love oneself yet to be unafraid of change.